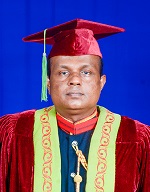 He took part in almost all the military operations conducted against LTTE in the North and East since 1997 to 2009. Then involved in Internal Security matters and disaster relief operations in the island, further, he has hold following important appointments in unit lines/regiment and formations.

In recognition of his valuable and unblemished service rendered to the Army/ Country, he has awarded with following medals.

During his career of 26 years, Colonel Pradeep Ratnayake has attended for following seminars.

The seminars/ workshops on Leadership conducted by Colonel Pradeep Ratnayake are as follows:

The areas of interest of the Senior Officer are as follows.